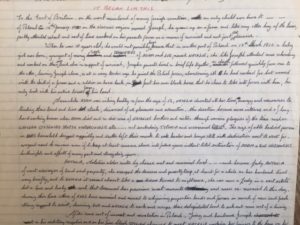 (Dad, Stanislaw Czerwinski’s, words in his own handwriting, 1979)

On 16thJanuary 1900, to the East of Britain, on the vast mainland of many foreign countries, in the Warsaw region of Poland, an only child, Józef, was born to Maria and Jan Czerwinski.  He grew up and worked on his parents’ farm and like any other boy of the times, also partly attended school.

When he was five years old he could not possibly have known that in another part of Poland on 14 March 1905, a baby girl, Natalia, was born, the youngest of Adam and Ewa Kozlowski’s many sons and daughters. She, like Jozef, attended some schooling and the rest of the time worked on her parents’ land.

Józef’s parents lived only a brief life together as death followed quickly from one to the other, leaving Józef alone. So at a very tender age he joined the Polish forces, abandoning all he had worked for but armed with the skill of a farmer and a soldier on horseback. In fact, it was his own black horse that he chose to take into the forces with him, his only link with his entire land which he left behind.

Meanwhile, Adam was ailing badly, so from the age of 12 Natalia devoted all her time, energy and resources to tending their land and livestock, divorced of all pleasures and education. This devotion became more intense when Adam died and so did some of Natalia’s brothers and sisters through various plagues of the time such as cholera, dysentery, dropsy, TB, typhoid and occasionally rabies. The size of the able-bodied people in Ewa’s household thus dropped rapidly and their deaths left their mark to work longer and harder still.

Antonina, Natalia’s elder sister, by chance met and married Lord Tadeusz Mroczkowski and became Lady Antonina of vast averages of land and property. She escaped the disease and poverty trap, at least for a while as her husband lived very briefly.  To Antonina it seemed like a dream turned to a nightmare. She was now a Lady in a vast estate but a lone and lonely soul that treasured her precious sweet moments and never remarried.

During this time, others of Ewa’s married and moved to adjoining properties, lands and farms in search of new and fresh subsistence, leaving Ewa and Natalia to work and scrape and eek out some sort of a living from their dilapidated land.

After some sort of unrest and revolution in Poland, young and handsome Józef in his military regalia and on his fine black stallion, chanced to meet Natalia working her fingers to the bone on her land. Ewa was now too old to assist in agriculture and tended only to household chores.

Natalia was about 17 then and Józef 5 years older.  He was impressed by Natalia, her youth, dedication and determination to survive not only for herself but for her mother Ewa.

On the other hand, Natalia never having seen a soldier in all his glamour and mounted on horseback full of zest, life and confidence became equally fascinated.  Though very formal with each other at first, they knew from the start that they were right for each other and soon married.

Did they abandon Ewa? Never in this world!  Józef, though still in the forces, soon set about helping Natalia’s and Ewa’s life become easier and more fulfilled, but for the three that was not enough. What about Antonina and the others all around them? Something had to be done to help them too. So, when a land reform came into operation, Józef and Natalia were allocated a portion of Antonina’s estate, as were others, leaving Antonina with still about two-thirds of the estate, but they all now lived and worked closer, all related to one another in some way and therefore helped each other not only on the scale of allocated land, but as one property with many workers and outside hired help being brought in also.  All, including Antonina, worked as one community to work the entire land towards success and prosperity with special individual rights to better their own allocated sectors as each one wished. The field mass narrowed down of entire land ownership maybe, but family community and land prospered immensely. 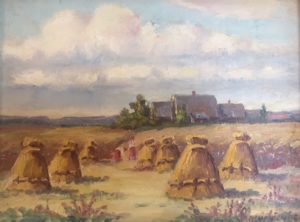 When Józef and Natalia eventually started having children of their own, they realised that there was need of a school for all the cousins’ children, the hired helpers’ children and for the children from the little village nearby, so they built one on their land and employed teachers for all to share in order to create a better brighter future for their children. A well was dug to supply them with fresh underground stream water.  Milk and food was in abundance and free.  They were determined that the future of these children would not in any way compare with their own past lives. At the border with a neighbouring farm, Józef and a neighbour erected a memorial.  It was the type of memorial of the lost unknown soldier but served as a memorial for all others who had lived worked and died in the attempt to survive.

So, this beautiful corner of the vast estate consisted of a modest house with a cattle shed by its side, stables, pig sties, chicken coops, guard dog kennels, horse troughs and a water well with rabbits and ducks, goats and geese all of which were well cared for and tended to.  The people were free and the animals also, but under constant supervision. No creature was confined and at the same time did not stray – they were freed during the day and sheltered at night. The river that ran by the hills and through the forest and fields of pasture and grain, merely bubbled along, while the beaten paths towards village and town made by man, horse and cart, which Józef constantly used to sell his produce at market, returning home drunk and happy with goods he’d bought and presents to mark success, made this allocated piece of land in the south east of Poland a beautiful and exhilarating place to be, to work and to live. Meanwhile Natalia never eased her duties on the land or with the livestock or with the people.  As well as being a full-time housewife, she also had to conduct meetings, and being very religious, always found time to kneel in lengthy prayer, seldom missed church and observed all religious days and teachings to the strictest and highest degree,  yet was a good caring patient and compassionate mother to her children throughout her entire life through thick and thin.  Her needs were simple.  She was frail but had a determination and endurance unshakable which to most people these days would be impossible. How can anyone put so much into each day of a life and tend to sickness in the family, even deaths and still carry on and find time to thank God for being so kind and lenient with her and her nearest and dearest throughout each day, thanking God for every moment, praying for world peace and to have mercy over all that suffer and asking God to give peace to all departed with a hint of giving us all another glorious day as the day just passing – whether it was a glorious day or not, it was to her, if on awakening everyone was still with her and in fair health.  She always asked for the guardian Angel to watch over everyone’s sleep be it in life or death should it follow, that in her life there was peace, contentment and satisfaction.  Amidst all this, she even had a sense of humour.

In a way, her monastic life was just that up to then, compared with what had to follow in the second chapter of her life, right up to the end at the age of 62.